[ads1 id=”alignright”]It would be an understatement to say that viewers were smitten by the beauty looks of Jennifer Lawrence in Catching Fire, the second film in the Hunger Games series. Ve Neill, one of the makeup artists from the film recently revealed the secret behind some of the 23-year old actress’s finest red carpet beauty moments.

According to Ve Neill, the makeup that Jennifer is wearing when she enters the Capitol as Katniss was meant to be reminiscent of burning coal since Katniss is from the coal district. The black shadow was actually created using glitter drops, which involved a lot of upkeep.

Ve Neill revealed that the look for the film can also be worn in real life with a smoky eye. She further revealed that she used Make Up For Ever gold pigment to create the gold underneath Jennifer’s eye. She also mentioned that even a different kind of glitter in a color other than block can also be used for the shadow.

Ve Neill further revealed the secret behind Jennifer’s “popping” cheekbones. While her cheekbones are a part of her anatomy, Ve Neill helps Jennifer use them to her advantage. Jennifer undoubtedly has a rounder face with beautiful cheekbones. So, Ve Neill informed that she uses a M.A.C Sculpting Powder to exaggerate, extenuate and sculpt out Jennifer’s cheekbones.

Dalton Wong, Jennifer’s fitness trainer, also revealed the Jennifer’s beauty secrets behind the makeup and her to-die-for body. According to Dalton, Jennifer takes a bath in Epsom salts every Saturday to rid her body of any bloating. To prevent her beautiful body from getting bloated, Dalton also makes Jennifer eat anti-bloating foods like asparagus and lean Turkey on Saturday and Sunday, and drink plenty of water.

Dalton also revealed that stress can also lead to bloating and build up of toxins, and to prevent this, he makes Jennifer drink a combination of Chamomile and Dandelion tea. Even though the credit for Jennifer Lawrence’s on- and off-screen mostly goes to her fitness trainer and makeup artist, it cannot be denied that she is one of the most beautiful women in the business. 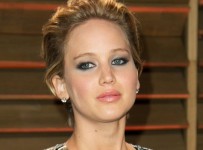