[ads1 id=”alignright”]Despite all of their talent and popularity, celebrities are people just like us. They have dreams, aspirations, disappointments and delusions.

Sometimes, they suffer from the same medical afflictions that the rest of us struggle with. People look at their idols on the big screen as if they were perfect sometimes, regardless of their shortcomings. To some extent, this is what being a fan is all about.

But all celebrities, despite their appearance, have some sort of personal issue they have to deal with on a daily basis, whether it is a physical or a psychological one. In this piece, we’ll take a look at celebrities who suffer from poor eyesight, how the ordeal affects them, and how they deal with it on a daily basis.

The star of TV show ‘Alias’ has been struggling with poor eyesight her entire life. Since an early age, Jennifer was forced to wear spectacles, which the actress absolutely needs to wear during her every day life. From a professional standpoint, her poor eyesight didn’t seem to squander her enormous talent.

If anything, most men will agree that Jennifer’s spectacles make her sexier still. Even though she is near sighted and has to wear spectacles at all times, Jennifer is still the type of woman most teenagers would like to find under their Christmas tree so there’s that. Say what you will about Lindsay, she is still a hot topic of conversation, despite her shortcomings. Even as a child star, Lindsay had her issues with wearing spectacles, which is something that she absolutely hated.

Even so, the beautiful Lindsay Lohan doesn’t seem to be affected by her spectacle-bearing early life, and neither should we. At the end of the day, Lindsay looks absolutely gorgeous with spectacles on, if we are to judge this book by its covers. If anything, her spectacles make Lindsay look slightly younger in every picture we find her wearing them. Selena is not only a young and talented actress, but a social activist as well. Selena does plenty of charity work in her spare time, and it genuinely a nice person. Despite her need for wearing glasses at all times, Selena is one of the sexiest young actresses in show business.

Even so, Selena cannot go out without wearing spectacles, which is something that used to create a great deal of discomfort for her when she was younger. Nowadays, Selena embraces her spectacles as a part of who she is, and gives little to no attention to how people feel about her poor eyesight. We couldn’t talk about Selena Gomez without talking about her ex-boyfriend. Justin is viewed, let us say controversially by people, which takes nothing away from how gifted he is. Even so, Justin does have a slight disadvantage, his poor vision.

Justin’s eyesight is pretty poor, even though he can go out without his spectacles every once in a while, which is exactly what he does from time to time. Looking into this more thoroughly, we see Justin wearing his glasses at various events, although he takes them off as soon as he gets around reporters and cameras. The star of ‘Mad Men’ has been dealing with poor eyesight for as long as she can remember. Fortunately for all of us, Christina’s glasses do nothing to diminish her incredible sex appeal. If anything, Christina is even more attractive thanks to her glasses, and we wouldn’t have it any other way.

The actress who was voted ‘Best Looking American Woman’ and ‘Sexiest Woman in the World’ has no worries about the way people perceive her because of her poor eyesight, and rightfully so. It would be safe to say that Christina’s spectacles contribute to her seductive image, and she is perfectly aware of this. If we were to be a bit cheeky we would say that it’s normal for a person of Madonna’s age to be wearing reading glasses. After all, every person has problems reading the small print past a certain age.

All joking aside, Madonna has been seen wearing glasses since the 80’s, even though the number of pictures of her wearing glasses is bigger nowadays. Apparently, the Queen of Pop needs her glasses during most daily activities, but during her professional dealings as well. Madonna has been seen on several occasions wearing spectacles during rehearsals, which confirms the singer’s need for visual aids. Justin was seen wearing glasses not so long ago, and it was believed at the time that they were part of his image. This isn’t the case apparently, as Justin does in fact, have problems with his eyesight.

In an interview, Justin says that he made peace with his medical issue, and that he is committed to fixing whatever can be fixed of his eyes with his prescription glasses. This being said, Justin has no problem with wearing glasses in public, and believes that his short sight isn’t the type of thing that he should be worrying about. 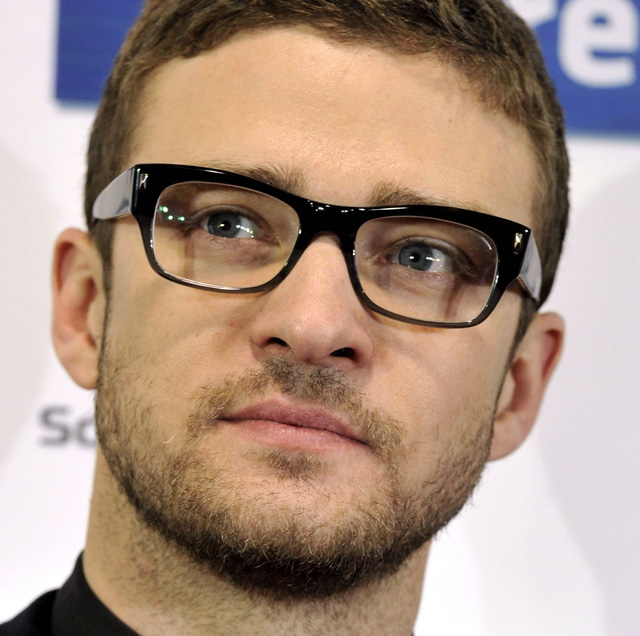 Voted ‘Sexiest Woman in the World’ more than once, there isn’t much you can put on Megan’s face to make her unattractive. Megan has the natural good looks of a mythological goddess, and a pair of glasses isn’t going to change that.

By surfing around the internet, we can find many pictures of Megan during her daily routine, and she is wearing glasses in most of them. Even so, Megan made peace with her poor eyesight many years ago when she was relatively unknown, and there isn’t much people can do or say to diminish her image of sex symbol at this point.